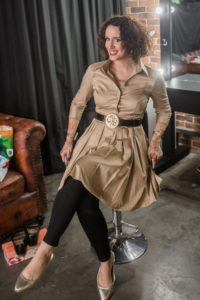 Mina Liccione is an award-winning performing artist, comedian and emcee hailing from New York. She has been seen on Broadway in STOMP and Sweet Charity, MTV’s The Grind, Edinburgh Fringe Festival, The New Pickle Circus, National Lampoon’s film Pucked, Image Nation’s As One: The Autism Project and led physical comedy and rhythm coaching for Cirque Du Soliel’s Corteo.

Mina was awarded “Best One Woman Show” at the WOW Festival in San Francisco, was rated “Funniest People in 2012” by Rolling Stone Magazine, is a two time nominee for “Best Female Personality” by Ahlan Magazine and was voted “Most Inspiring Woman” in the UAE by Philly Arabia. She graduated with a BFA in Dance, minor in Theater Arts from Marymount Manhattan College and holds an MFA in Interdisciplinary Performing Arts from New College of California.

Some of her directorial and choreographic credits include The Magic of Motown – Stevie Wonder Opening, WAE Opening Ceremony, Little Shop of Horrors, Invisible Cities: Words about a place called Home, San Francisco Youth Circus, Improv Revolution Troupe and the powerful short films that have gone viral; The Shocking Truth about Muslims and Muslim Women Uncovered.

In 2008, she co-founded Dubomedy Arts with her husband Ali Al Sayed which is home to the Region’s first Comedy School and all-female troupe; Funny Girls UAE. She is extremely passionate about using comedy as a tool to break stereotypes and bring together people from diverse backgrounds. The comedy duo also founded the Clowns Who Care Project which brings joy, awareness and support to centers for children with special needs, refugee camps and hospitals.

Mina just filmed her debut 1 hour stand-up comedy special entitled “Mina Liccione: Araby By Nature” in May, 2017 acting as the first female to do so in the Middle East. Stay tuned for her upcoming appearances on Seasons 2 and 3 of Comedy Central Arabis Presents…. Stand-up! Follow her on social media at @MinaLiccione