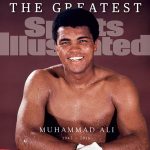 Mina had the great honor of meeting Muhammad Ali with her father, Tony Liccione, a former boxing promoter and beloved historian. Tony had organized a charity event that Muhammad attended as the main guest of honor. Though, it was during one of Mina’s most difficult times in her life it soon became one of her best thanks to him. Rest in peace champ. [Read] the full story.